Being Bank Holiday Monday we decided to stay put here at Compton and avoid the anticipated busyness. We did get our ration of orange chips from Peps Plaice today but I regretted the donner kebab meat later!

We set off before 9 this morning and by midday we had negotiated Bratch Locks and tried up outside The Round Oak and had some lunch, we had though of staying here for the night, but it was still early so we pressed on for another hour and a half, down The Botterham Staircase and moored below Swindon Lock at about twenty to three. 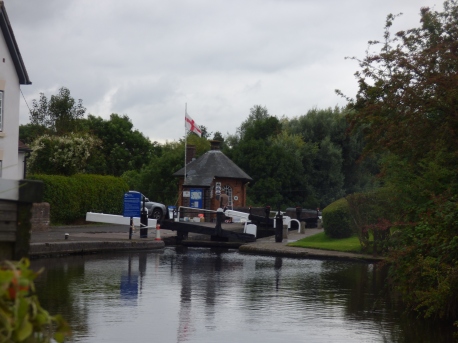 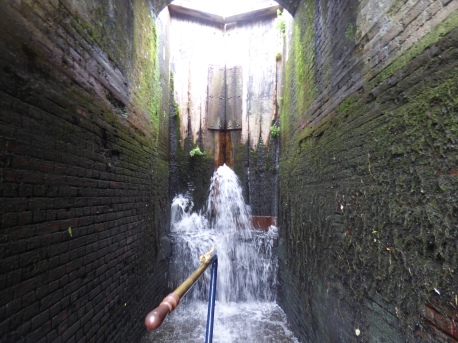 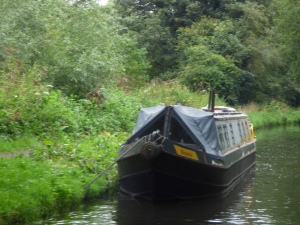 Today we left at 9:20 and retraced our route, we stopped to fill up with water at Greensforge and spotted Ben’s boat again, lunched at Stewponey and found a space waiting for us at Whittington. I started planning a redesign of my solar panel system which involved cutting holes in the woodwork to move a 240 volt socket.

Today I continued my butchery of the woodwork, photos to follow when it’s finished, and we noticed a queue of boats building up before the lock. It transpired that there was something preventing the bottom gates from closing and trapping a boat in the lock. C&RT were called but by the time they had fixed the problem the queue was about 8 boats long our side and almost as many wanting to come the other way.

After Joy’s art class we made a late departure and did a short hop down to Wolverley, we passed Kate & Heather on nb Morning Mist aka Alarum Productions returning from performing at the IWA Festival at Worcester. We found a mooring at Wolverley right next to the tearooms, but sadly by the time we arrived were closed so I couldn’t indulge myself with one of their delicious scones with jam and clotted cream.

I was busy writing this when nb Sonflower (who we know from Banbury) passed by, after the third boat came up the lock we figured it must be ready for us. As I moved up to the lock-landing I noticed that the bottom paddles were up indicating another boat was coming through, but no, it was two C&RT guys doing some repairs, they kindly took a break from their work to let us through.

One more lock and a few miles and we were stopped outside Sainsburys and went in to get some shopping.

Joy put some potatoes in the oven to bake, and on we went through Kidderminster, Caldwell and Falling Sands Locks. Joy even managed spot a kingfisher today.

We reached Mitton Railway Bridge and moored up for our lunch of jacket potatoes topped with cheese and onion for me and Tuna with lime for Joy.

Passing The Black Star, coming into Stourport, a young lad with his mum were magnet fishing. The boy foolishly cast his magnet in front of the boat and caught us.
They tried to pull it off but it was only by applying ‘full stern’ that they escaped being pulled in. I had to go up to the front end and with difficulty got the magnet off.

The lad was very upset while Mum was apologetic and embarrassed. Still no harm was done and we were soon on our and passing through York Street Lock assisted by the crew of a couple of Starline boats who were under instruction and tying up on our mooring a few minutes later.