After a peaceful night at Wolseley Bridge we breakfasted on Staffordshire Oatcakes (courtesy of Morrisons at Rugeley) filled with chopped bacon, mushroom & scrambled egg before setting off at 10:30 am.

We paused before Great Haywood lock to post a package at the post office and saw Jason from our old mooring go past, we had a chat at the lock, then  after lunch we followed him through Great Haywood Junction and onto the Staffordshire & Worcester canal and through Tixall Wide (header photo). After Tixall lock we pressed on as far as Stafford and moored at Radley Bank. 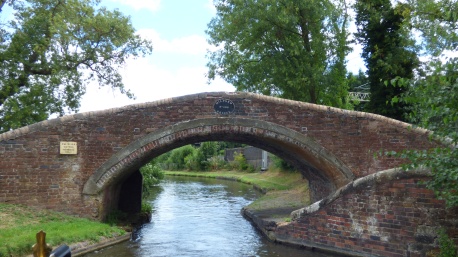 Later we visited Radley Bank Inn and had a drink while tea was in the oven and brought back a takeaway portion of chips to have with our pies. Later we tried sweet oatcakes filled with foraged blackberries & apple, topped with cream!

We were up and off just before 9:00 am this morning and twenty minutes later we were passing Stafford Boat Club and shortly afterwards we were at Deptmore Lock  which is a 10′ 3″ rise not quite rivalling Somerton Deep lock at 12′ and far easier to operate.

Next we passed through the neatly manicured village of Acton Trussell and were pleased to see nb Lady Wren looking far smarter than when we passed in 2010 when she was overgrown with brambles.

We moored at the Visitor Moorings above Penkridge Lock just before noon and called it a day.