It was up and away at 9:35 am, but everybody else on the moorings had left earlier, so we expected all the locks to be against us… and they were, Awbridge, Ebstree, Dimmingsdale and Wightwick!

At Wightwick Mill Lock our luck changed as a boat was just exiting, and after another 20 minutes we were in Compton where we stopped for lunch.

We sauntered down to the Sainsburys Local for some provisions and  on the way back to the boat, picked up fish, chips & scallops at Pep’s Plaice;  when we were suitably refreshed we set off again.

Just Compton Lock next & we were done with locks for the day, it was under the ‘Meccano Bridge‘ at Tettenhall and on to Aldersley Junction where the 21 locks up to Wolverhampton begin.

… but not for us though, onwards past Autherley Junction and through The Autherley Narrows where the canal cuts through a sandstone ridge and becomes a single track canal with passing places.  We just got through in time as a boat with another in tow was waiting at the other end.

Another half an hour or so and we were tying up outside the Anchor Inn, we didn’t dine there as previous research showed that their fish and chips were £12.50 whilst Pep’s Plaice offered a lunchtime special at £4.00 which couldn’t be beaten.

Last night’s mooring was noisier than I remembered with the murmur of the M54 and distant trains. This morning they started cutting the grass outside the pub at about twenty to eight, no doubt to spite us for not patronising their restaurant.

So after a little bike ride down to Coven Co-op to buy some vinegar and oranges (unsuccessful on the orange front) we set off before 10 to cover 5 lock-free miles to Gailey and moored below Gailey Lock for the night.

Stop in the middle of a chemical works, I don’t think so! 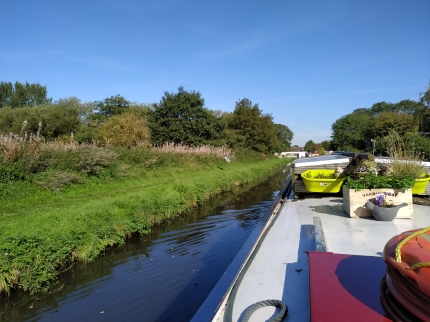 … and they’re on the home straight! Just the four locks this morning our journey taking an hour and forty minutes to our home mooring.

It was a turnaround day for hire boats at Gailey Wharf and several passed us returning to base before we left. 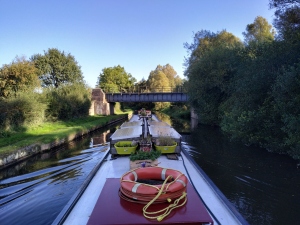 Passing under Littleton Colliery Railway Bridge I was interested to find out more about it as when driving to the marina from Cannock the gates of a level crossing remain on the road belonging to the same line.

I was surprised to find that Littleton Colliery only closed 25 years ago as the track bed has all but disappeared.

Culture 24 reports: At the end of 1992, Littleton Colliery in Cannock, Staffordshire was designated as a ‘core’ pit by the Conservative government of the time, sparing the site from the fate of hundreds of other doomed mines across the country.

A year later, in December 1993, Littleton was closed, and 800 workers lost their jobs.

Arriving at the marina we got a pump-out, collected our post from  the office before slotting back into our space and being welcomed back by our neighbours.

This afternoon Jer, Louise & Iona brought our car back to us and stayed have a chilli with us. (It was’t hot enough for Jer & Iona so they added extra chilli powder… crazy people!