You may have been wondering what has been happening with us for the last eight months, since we arrived back at our mooring.
In light of what has happened in that time we couldn’t have been in a better place.

The credit for the header photo goes to Lorie who has a boat here. She took the photo today flying over the marina with her partner Kim in his light aircraft!

Through the mild winter we had all the facilities we needed on hand and took the opportunity to do some jobs on  the boat, including fitting LED striplights in the cratch & various cupboards. This enabled Joy to do jigsaws in the darkening evenings and to find stuff in  the recesses of cupboards without hunting for a torch. 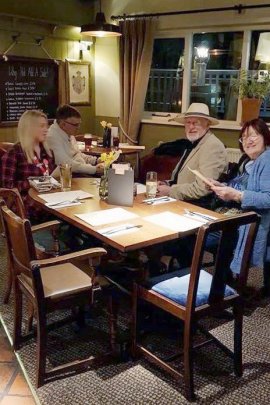 Chris celebrated a ‘significant’ birthday in February and we boated up to The Anchor at Coven, about 15 minutes away by car but three and a half hours and 5 locks by boat. We had company as we travelled in convoy with Leigh & Malc on their boat and the weather wasn’t too bad. We were joined, on the day by a group of about 12 for a meal, and our son, Jeremy, his fiancée Louise and his two children joined us on the Sunday.
It was a good weekend and we thoroughly enjoyed ourselves.

No sooner we were back, the Coronavirus came along and we were under lock-down!  We managed to get one Tesco delivery at the beginning but none since from any supermarket, but we’ve managed OK and neighbours have been good, asking if we needed anything.

A group of us from the marina had regularly been going to a pub quiz but Covid-19 put paid to that, so Chris embarked on a rapid learning curve by Live-Streaming a quiz to our fellow boaters, with a few friends further afield joining in.

The technology hasn’t been limited to quizzing, Joy has been very pleased to re-join her Banbury art class at The Artery by means of on-line classes, we have been taking part in our church’s prayer meeting via Zoom, and joining some of our previous churches Sunday Services by YouTube.

The marina has been closed to all but those who live-aboard and the owners have taken the opportunity to re-lay the driveway with concrete which meant cars were unable to go in or out for 10 days until the concrete was ‘cured’. It’s still being landscaped but it is a vast improvement over the previous pot-holed track. 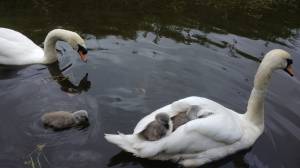 The ducks have had a brood of ducklings but only a couple survived, now the swans have four cygnets who are delighting all who see them.

Over Easter & the VE Day celebrations some of the family history sites have offered free access so we took advantage. Chris found a distant relative  (fourth cousin) with a Hollywood pedigree!
Sam Wren who with his actress wife Virginia Sale & their twin children even had a TV series, called The Wren’s Nest in the 40s & 50s..

We discovered a bit about Joy’s dad’s military service, he enlisted in 1942 and served in North Africa, his battalion 3rd Regt Royal Horse Artillery supporting the Desert Rats in Tunisia and Italy.

We have grown some tomatoes from seed and they have now been potted out. Some lettuce, coriander & everlasting spinach are sprouting and we just hope we can keep them alive!

The Canal & River Trust have just allowed leisure boaters to visit their boats, do a short cruise, but not stay aboard overnight. They hope that normal navigation can be restored by June, but we shall wait and see.