Our cunning plan today was to return to The Pig Place and make use of the electricity supply and use our washing machine, £15 for an overnight mooring including electric compares well to a couple of washes at a laundrette.

Before we moved off we had a message from Louise asking if she & Iona could visit as she (Louise) had left her handbag on the boat on the last visit.

Just 1½ miles and 2 locks, but there were queues at both locks and the journey took us an hour & forty minutes.

We just had time to get a load of washing on when the girls arrived and we had lunch from the Outdoor Cafe, half-price thanks to Boris’ Eat Out to Help Out Scheme.

We spent a lovely afternoon with them and later revisited the food bar for our tea, so lazy!

Another two locks today on the way to Banbury and since we came down, the dilapidated Grant’s Lock Cottage had suffered an arson attack, so sad to see.

The grass cutting contractors were out in force with two mowers and two strimmers, will the job get done twice as quickly? 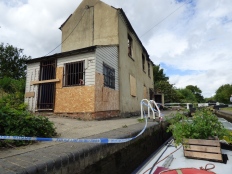 Just before one o’clock we pulled alongside our friend Jill’s boat and begged the use of her water-point, to replace all that we’d used doing the wash. We found a mooring near Samuelson Bridge, handy for Morrisons just across the canal.

Jill joined us for an impromptu lunch and later I collected a new tool bag for my bike at Argos and spent the evening modifying the fixings to suit my bike. Jill came past again later and had a go on the DYU which judging from the video she thoroughly enjoyed.

We plan to stay here for a few days and do some shopping and jobs on the boat. Oh, and seeing more friends, no doubt.

After waiting for a suitable moment, we cast off this morning following a passing hire-boat, we were travelling backwards through the lift bridge which the hire-boat crew were happy to keep open for us; they were less happy when two more boats came through, but this is the nature of canal boating, anyway, you can’t remove your key from the mechanism until the bridge has been lowered.

The reason for our bizarre behaviour was to save a 4-hour journey to Dukes Cut and back just to turn around. We had intended to call and see bank-dwelling friends, Phil & Bryony, at Kidlington but they were away on holiday! So after negotiating the bridge, we turned at the winding hole (turning point) and pulled onto the wharf where we replenished our water tank.

By 10 am we were off, retracing our route, there was a queue at Shipton Weir Lock and we were helped by the crew of the following boat who we met at every lock. Up the River Cherwell through Bakers Lock, past the Rock of Gibraltar Pub, Kidlington Quarry (where the moorings were as full as they had been empty on the way down)  Northbrook & Dashwood’s Locks and we were at Heyford.

A mooring with clear views across the fields was free, TV reception good and we just about had phone & internet on O2 but not EE network.

A quick message to our friend Nicky, who lives opposite and she came around bearing cake made by her daughter, she had spotted our arrival already.
It was good to see her although Mike was ‘busy’ watching F1 (for professional reasons as he works for an F1 team!).
We heard with amazement how old her kids are now and her experience as a GP in this Coronavirus pandemic.

We saw Bones again briefly in passing and spent a good night here despite the railway line next to us as there were fewer trains running, being Sunday.

This morning we were making ready to leave when along came Alex for a chat, we bade our farewells and as we were passing the Heyford Wharf we saw nb Nutwood and stopped to see Andy, who I used to work with here. He used his influence to get us a pump out despite being a ‘turnaround day’ for the hire-boats, unfortunately, the machine failed halfway through so we will have to make other arrangements.

There were queues at all the locks today, Heyford Common Lock was still in a bad state with leaking gates and now a paddle out of action but all the boat crews helped each other and we managed okay.

Shortly after we had a problem where passing a moored boat a couple in a canoe approached going hell for leather with no intention of leaving their course.

Being the gentleman that I am I moved over to let them through and got firmly stuck on the mud! Fortunately one of the boaters I’d met at the lock soon came along with his Lister HR3 powered boat (that’s quite a big engine) and after a couple of attempts pulled us off. The Latin motto on the side of the boat “Lister hanc navim impellit ubique”  translates to something like “The Lister [engine] propels this boat everywhere”

We stopped for lunch at Sommerton Meadows before tackling Somerton Lock (our last today) again there was a queue but that meant, plenty of people to help us through.

I love the railway viaduct at Aynho (see the ‘featured’ photo at the top of this post) apparently it’s part of a flying junction, info from Wiki2 if it makes you any-the-wiser!

… with the down line from Bicester North grade separated from the up and down lines from Oxford. The junction is the point where the Great Western Railway’s New North Main Line (via Northolt, High Wycombe and Bicester North) of 1910 joins the original Didcot and Chester Line via Oxford. The former line is also known as the Bicester cut-off line.

We arrived at Aynho Wharf just after 4 pm, finding plenty of space to tie up and settled ourselves in feeling a bit weary after nearly six hours boating including our lunch stop.

Today was our 48th wedding anniversary and we contemplated going up to the Boat Inn for an evening meal, but in the end, I cooked us a Boeuf Bourguignon.

Oh, have you noticed I’ve taken a new header photo of Wren-Nest moored here at Thrupp.

Wow! Wasn’t it hot today, not a lot was done except to rig up our sunshade and try to keep cool, and of course being Thursday Joy had her online watercolour class, the subject was a bear, the less said about the result the better!

It was a bit cooler today, well more of a breeze which helped a bit and in the early evening we ventured down to The Boat where we enjoyed a cool beer in their garden.

This morning I got the bike out early and rode the 3 miles to Sainsbury’s before it got too hot, I tried using the Sainsbury’s SmartShop app for the first time. You scan your shopping with your phone and put it straight in your bag, scan the phone at the checkout, pay and Bob’s your uncle. The only downside was juggling the trolley, phone & shopping list.
When I got back I said to Joy, “Wouldn’t it be a good idea if the app had a shopping list feature”, guess what… when I had a look at the app a bit harder, it has!

I had to be careful on the ride back with a backpack on not to pull wheelies, I’ll have to find a way to carry the load on the front of the bike.

Joy put a couple of her paintings out on the cratch table this afternoon and was delighted when someone asked to buy one.

Later on in the afternoon, our friend Nina cycled down from Dukes Lock to see us which was lovely as we hadn’t seen her for years, in fact it was when Joy broke the ball of her humerus in March 2013. See the story here.

Later we attempted to polish the side of the boat & clean the windows while tea was in the oven, Greek Stuffed Peppers & Latkas (a kind of Jewish Rosti) proper world fusion food.

This will be our sixth night here so we’d better not outstay our welcome and head back north tomorrow.