The work having been completed in dry-dock we decided to go for a short ‘shakedown trip’ on the following Tuesday to see if all was OK before starting our summer trip, so we went up to Kidderminster and back without any issue except getting a piece  of carpet tangled on the propeller.

On return to our mooring I noticed the oil pressure gauge wasn’t working, so a delve into the bowels of the engine bay was necessary and a broken wire repaired. Anno domini doesn’t make the contortions required any easier!

The fuel tank was filled with diesel, coal was restocked (in May!) and shopping trips to obtain provisions for a year, or so it seemed!

We had thought of leaving on the Friday but it had escaped our notice that it was the start of the Bank Holiday weekend and therefore the weather was bound to be foul, which is indeed it was on the Monday. We therefore delayed our departure until today, Wednesday.

e waved goodbye to our neighbours before 10am and we were soon at the staircase locks where a one of Starline’ hire boats was on the lock moorings, they shuffled out of the way for us as a boat was ascending the locks too.

The volunteer lock-keepers asked if we would like their assistance which we gladly accepted and we were out onto the River Severn in good time before half past.

here was a brisk flow on the river and we made good speed but photo opportunities were limited as it was a dull morning.

Joy looked out for the ‘Amstel Inn’ which her art teacher, Barry, had spoken about but it turned out that that was the Black Country pronunciation of Hampstall Inn! 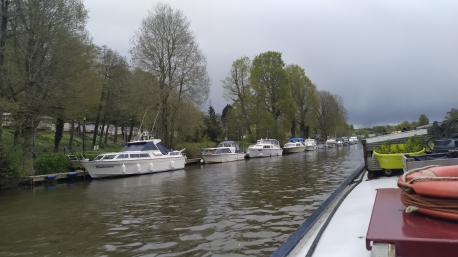 All the Severn locks are manned and we were at Lincomb Lock before 11 and were passed through once the locky had cleared a branch  that was in the way. We were through Holt Lock before 12 noon and then it was a down to Bevere lock in another 40 minutes.  It started to rain so Joy deserted me to make a hot cup of tea but it wasn’t too bad, apparently a lot better than back at Stourport where they had thunder and hail!

We tied up opposite Worcester Racecourse for lunch, but decided to move on to Diglis Visitor Moorings as a) The racecourse moorings charge a fee and b) The phone/internet signal there was abysmal.

There was one space left at Diglis so I turned to face into the current and a kind lady off one of the boats grabbed a rope and helped us get into the space. 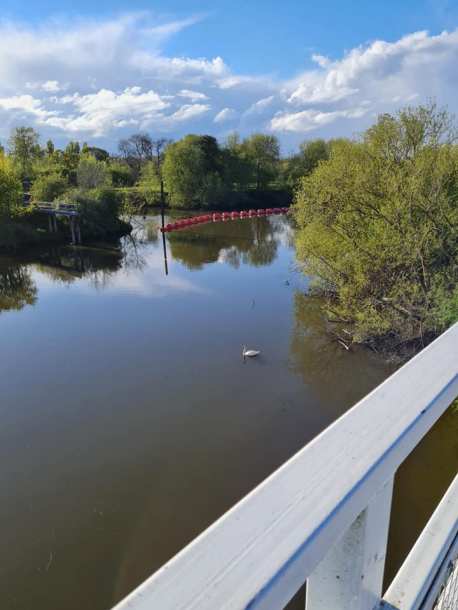 A couple of photos stolen from Leigh

On checking the engine bay after tying up I was alarmed to find a lot of oily water in the bilges (I guess it was something to do with the problems I had with the oil cooler O rings) I used the WetVac to clear it out and our good friends Malc & Leigh brought two 5 gallon containers down by car to dispose of it.

We decided to have a rest day tomorrow, Thursday, Joy can do her on-line art class and we’ll give the engine another test on Friday.

One thought on “The Summer Cruise Starts Here”