As planned we had a rest day on Diglis river moorings, Joy produced a beach scene in her art class, while Chris did some jobs on the the boat.

I decided that a trip upstream would test if our problems of Wednesday had been solved, so we gave the engine an hour’s ‘workout’ up past Worcester Racecourse & back with no problem, we turned again just before Diglis River Lock and approached the junction with the canal. 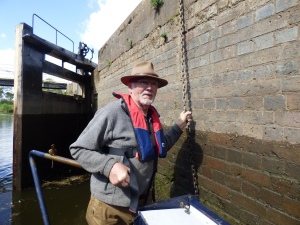 We tied up on the pontoon and Chris went up to prepare the lock which is a broad one, as he was opening the gates a couple of volunteer lock-keepers arrived and offered to ‘work us through’. He brought the boat in without incident and was grateful of the lockies’ help through the second lock as well.

Once on the canal we thought it prudent to fill the water tank, so stopped at the first tap, another boater asked if we would mind using the next one as he wanted to bring his wide-beam boat over for a pump-out. Being the obliging soul that I am I complied but our hose was just too short so I had to improvise an extension, which led to wet feet, trousers and muttered cursing. The mood was not improved by discovering a crack in the stove door glass. 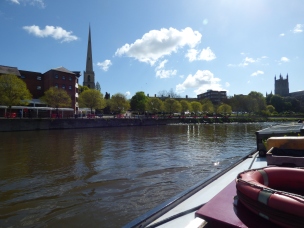 Back down the river

Hey mister! There’s a hole in your bridge.

Clothes changed we moved along through Sidbury, The Commandery (something to to with the civil war, the bridge is decorated with pikes & helmets) and Blockhouse Locks. We needed a few items of shopping and had been searching Google Maps & our guidebooks to find a nearby mooring to no avail.

Just as we were approaching Bridge 5 (George Street) we spotted St Martins Quarter shopping centre, where Asda is located, and realised we had just passed some mooring bollards which weren’t marked in any guide. A quick application of reverse and a little encounter with some shallow water and we were tied up and Chris was dispatched to do shopping while Joy prepared some battered courgette slices & halloumi for lunch, a favourite Greek dish.

A phone call to Worcester Marina revealed that they had a new stove glass at an excellent price so we stopped outside their entrance leaving Joy with the boat tied to a lamppost while I tried to find the way in on foot. After an abortive trip up a footpath to nowhere I phoned them again and was told a BW key would give access through a locked gate. On our way once more we found that we had got a complete jacket wrapped around the propeller and another stop was needed to remove it through the weed hatch.

Another three-quarters of an hour and we found Lowesmoor Visitor Moorings, where we called it a day. We found no TV signal there but excellent internet so we had an early night watching The Persuaders and The Saint on YouTube.