We were moored behind narrowboat Felix and in the early evening the owner, Brian, came to warn us that a fallen tree was floating towards our boat, however it stopped before in reached us, so introductions were made and we discovered he was a retired vicar.

We spent a peaceful night but when got up found that the water was over the towpath, the river level having risen overnight and that the tree had moved closer and was now touching the boat. I had moored so that I could slacken the ropes without getting my feet wet, but the tree meant that we could not get out forwards. 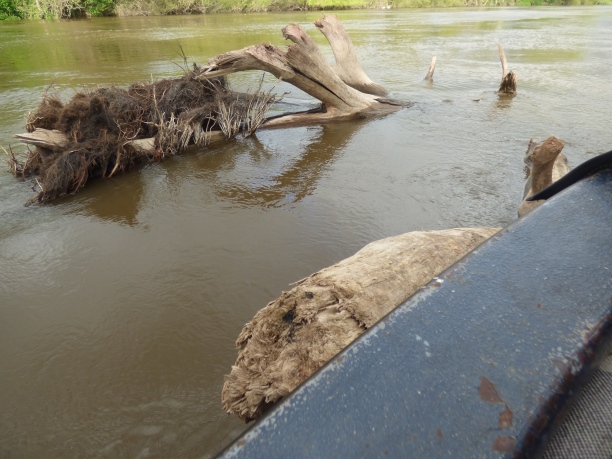 Not much towpath dry

I rang Diglis Lock for advice, but he called back saying his supervisor was not on duty and it would be best to call Canal & River Trust’s national number. I did that and was eventually put though to someone who promised the Area Manager would call back. Someone did call just less than an hour later and said it was not their responsibility but Worcester City Council’s I pointed out that they were unlikely to have suitable equipment (e.g. a boat)

I did phone the city council but a voicemail promised a callback within 48 hours.

An hour had passed since first contacting C&RT so after conferring with Brian on nb Felix we decided to take our salvation into our own hands. I would try to reverse away from the tree and ‘breast up’ (tie the boats together) to go downstream.
We both managed to get away and turn and after going through the arches of Worcester Bridge we breasted up to go down past the weir to the river lock and turn around.

Looking happy safe in the lock

Brian was a bit nervous as only yesterday he had been swept onto the weir and had to be towed off, but the manoeuvre went OK but on turning back into the current both boats listed at quite angle, Brian suffering the loss of a bottle of red, which smashed on the kitchen floor, we fared better with only the cutlery drawer landing upside down in our kitchen.

The current was now against us but the power of both engines ensured we made (painfully) slow progress.

As we passed Coalboat Roach Brian indicated we were going back onto the canal and, bless them, the crew ran up to the lock and opened  the gates so we could both go straight in. They worked us through both locks (for which we were very thankful) and we were once again safe on calm waters.

When we were in the lock Worcester City Council rang back but I was able to say the emergency had passed but they did report it matter to the County Council for me.
It was not until much later that C&RT phoned back basically to say that it was a buck-passing exercise having been ping-ponged from one department to another.

Meanwhile a generic email was received from C&RT saying “CAUTION STRONG STREAM Red – Do not proceed. We advise users of all boats not to navigate because the strong flows make it difficult and dangerous (Locks may be closed)”

I think it’s appalling service when they don’t respond promptly to what could have been a life-threatening situation.

Meanwhile we had tied up safely and enjoyed a restorative pint of Wainwright ale and some lunch with Brian at The Anchor. Being just too late for the breakfast menu we settled for Tomatoes & Burrata, (a bit like Capri Salad we’ve had in Italy, but we thought it a bit bland) while Brian enjoyed Dirty Fries  (with Cowboy Chilli, Habaneros & mozzarella)

Thank God for keeping us safe!

One thought on “What a Mistaka-to-Maka!”